Recently, I bought a new coffee grinder: the Timemore Chestnut X. The latter was designed by a Chinese company which is not at its first attempt. Indeed, Timemore has created in recent years a whole range of coffee grinders (Chestnut X, Chestnut G1, Chestnut Slim, Chestnut C / C2 and Chestnut NANO). Their latest addition, the Model X, is the brand’s most upscale mill. What is it worth? We will see him. It presents several interesting innovations.

In the world of coffee, precision is essential to obtain a good drink. It is in this sense, that I regularly indicate on my blog that you have to weigh your coffee. This precision, important for an espresso coffee, is less important for other extractions (type V60 for example). In this sense, the company ANKOMN sent me a measuring spoon to test. It is the same company that manufactures the vacuum boxes that I had already presented on my site. What is the precision of a measuring spoon worth? This is what we will discover immediately.

END_OF_DOCUMENT_TOKEN_TO_BE_REPLACED

For a long time, I wanted to test the El Comandante C40 MKIII coffee grinder. In truth, I had already spotted it during my research to acquire my first high-end coffee grinder but I could not buy it because at the time I lived in Canada, the C40 was not available in this country.

This coffee grinder is presented by many forums as being one of the most reliable on the market. What is it really? To be able to try it, I ended up buying it on Amazon. You will understand, this test was done by passion and in a completely objective way. 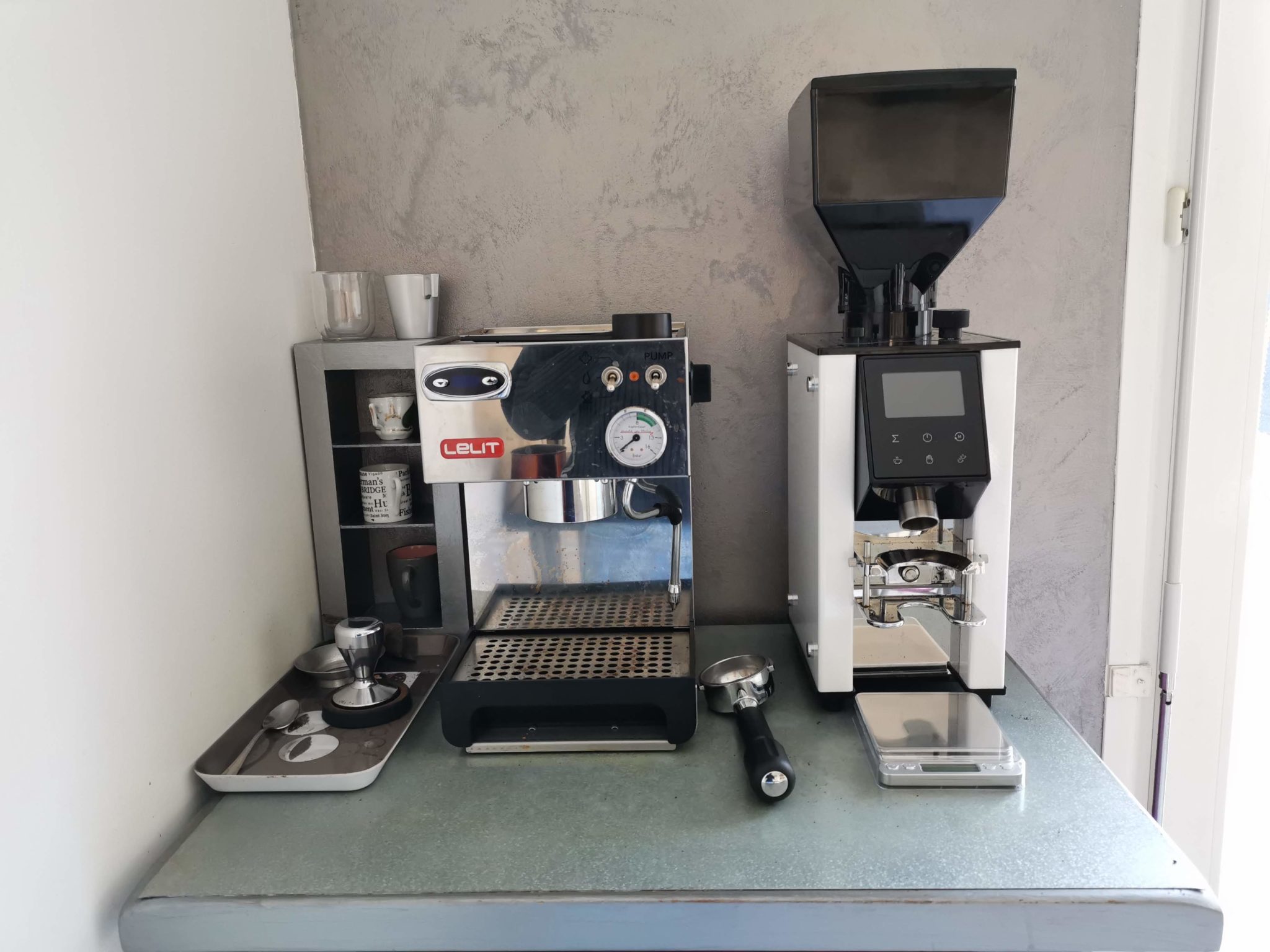 A few months ago I participated in a contest organized by BPlus: a company that I have presented several times during my articles. The object of the competition was to create a short video of their Apollo coffee grinder and put it on Youtube. In this way, the most liked video chose the winner. Lucky, I won first prize in the contest: a $ 300 voucher from BPlus.

Since I live in Europe, the director of the company offered to take over an almost new electric coffee grinder. He only used it during the world coffee in Milan: the BZF64 normally sold much more expensive.

END_OF_DOCUMENT_TOKEN_TO_BE_REPLACED 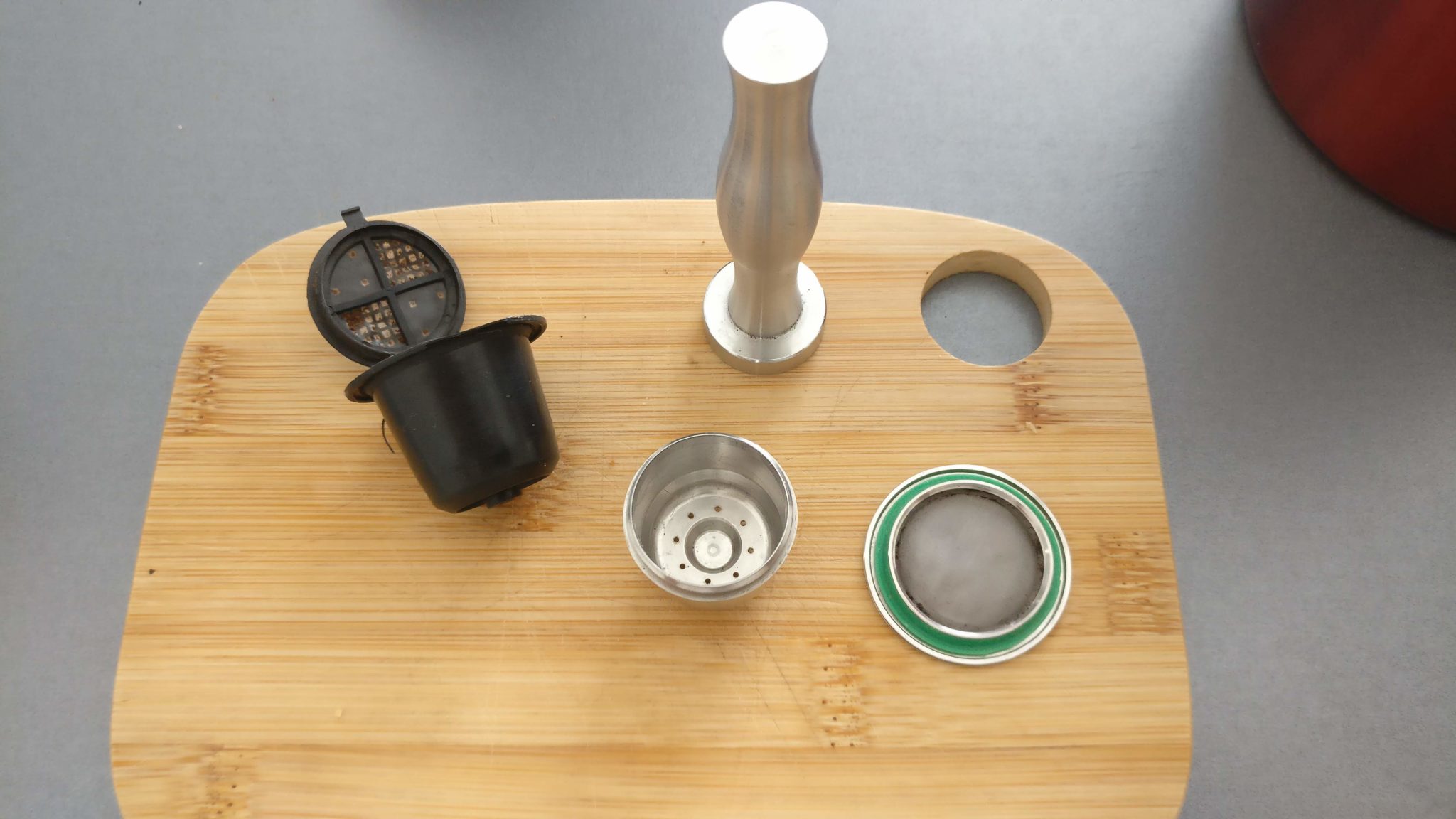 As François Etienne explains in his book “Le guide pratique du café”, Nespresso has done good to the world of coffee. This great brand has managed to make (with their varied range of capsule) realize to the general public that coffee does not have a single taste. They paved the way for the concept of “coffee for oneself” and people began to take an interest in the different possibilities that a cup of coffee can offer.

Some of the consumers (including me) who can be categorized as “disappointed with Nespresso” have begun to return to conventional extraction systems with the sole purpose of creating a good coffee. But there was in my case an intermediate step that was to use reusable Nespresso capsules. I relighted my old Nespresso machine to explain step by step how to use it with reusable capsules. 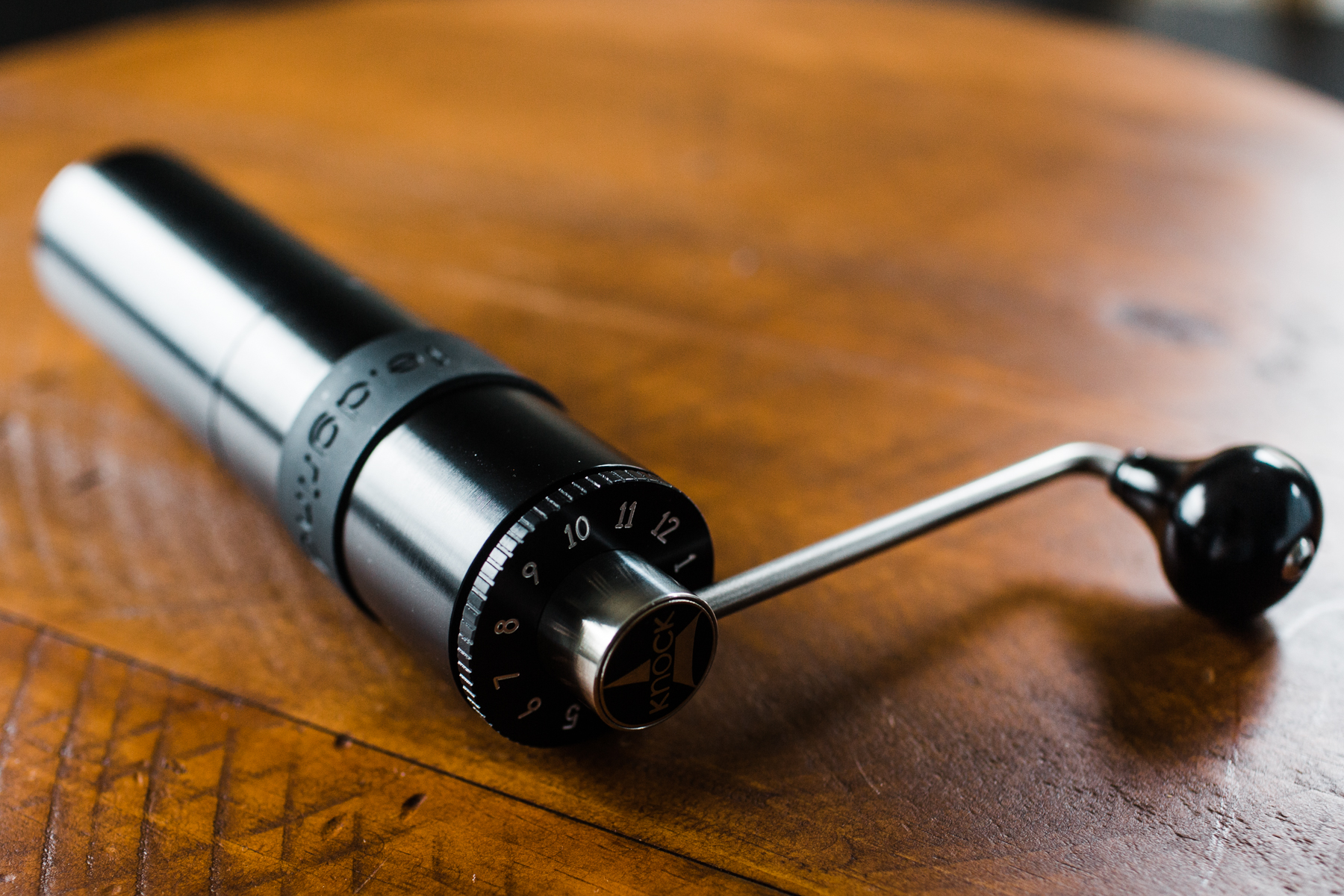 Several reasons push me to prefer manual mills to electric mills. They are less noisy, have precision mechanical side that I like, waste less coffee (with less retention). At the time I sought to acquire a coffee grinder, I started listing all the premiums manual coffee grinders on the market. This is the purpose of this article. 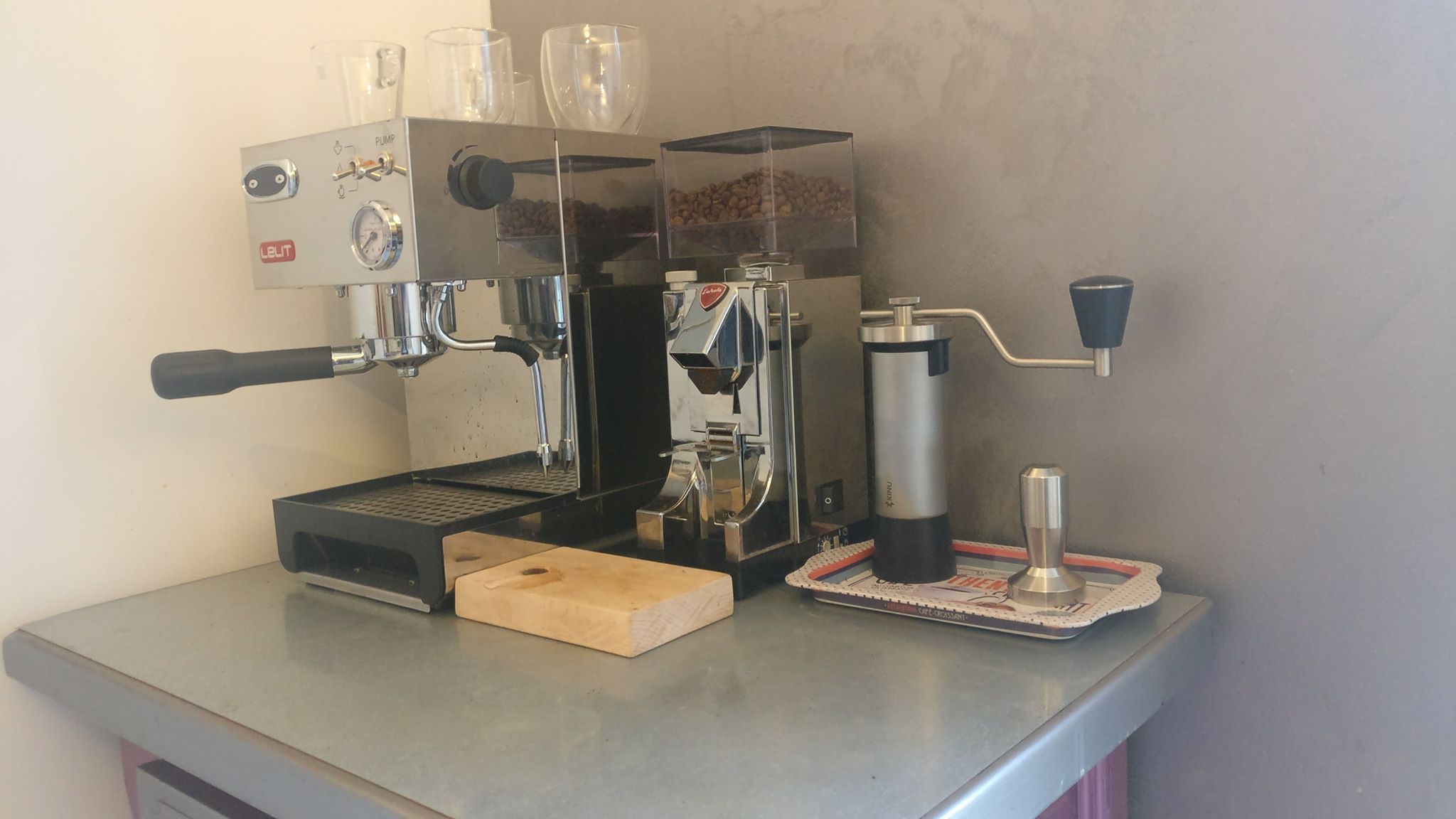 Recently passionate about the world of coffee, I decided to take my first steps with a manual espresso machine. I automatically excluded any automatic machine because, precisely, it does everything alone and that my only participation in the ritual of coffee preparation is to press a button.

Limited by my budget and after many readings, I compared, weighed and filtered the information to extract a Lelit 41 TEM PID.

According to the description, it seems to correspond to my wishes. What is it really?

Do you like coffee and you’re in a hurry in the morning? Do you have people at home or you do not want to waste time grinding coffee by hand? So like me, you probably thought about acquiring an electric coffee grinder. 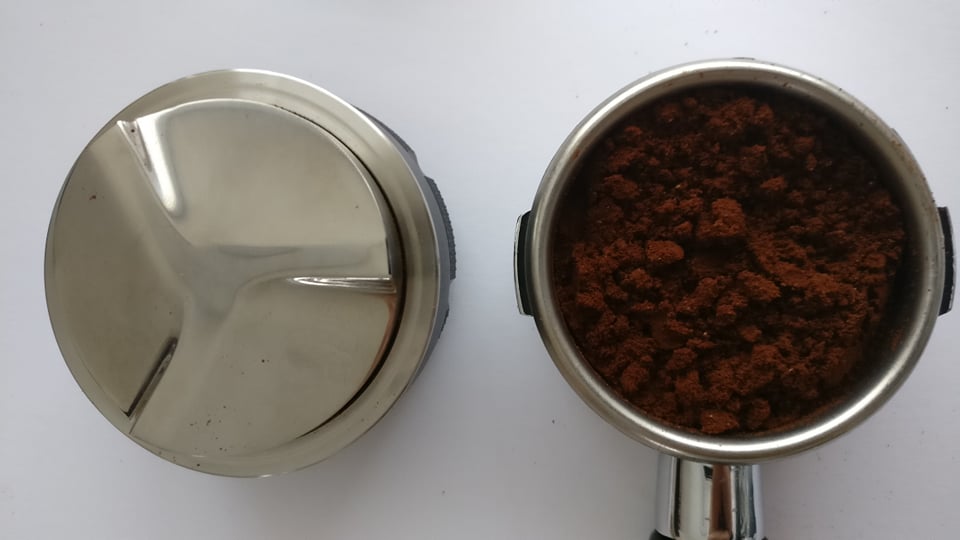 Spreading the coffee in the portafilter is a step to take just before compacting the grind. Incorrectly done, this step can be the cause of bad extractions of your coffees. When you have more coffee on one side of the basket and you cup directly, it creates less dense areas, which will facilitate the passage of water.

Thus, a bad distribution of the coffee grounds before packing them contributes to an ignoble extraction of the nectar. To remedy this problem, there are some small tips. Some of them are little used in the professional world because they take time. Baristas will therefore be more likely to use accessories dedicated to this task.

The coffee distributor is the best tool to homogenize the coffee before tamping it. Click here to find it on Amazon

In any case, it is essential to have the portafilter basket cleaned and dry before adding the grind. This in particular prevents the coffee sticks and adheres to the basket.

This is a method often used by people who fill the basket of the portafilter to the brim. With the finger, spread the coffee without packing it and expel the rest. I’m not a fan of this method, because I think we’re wasting coffee by applying it.

Another method that does not require an accessory is to tap the portafilter on the worktop to break the mounted grounds. Then with your hand you tap on its sides (of the portafilter) to try to adjust the level. This method is the one I used at the beginning, it requires experience and is probably the longest and least effective.

One of the risks of this approach is to put coffee everywhere.

The use of a wooden toothpick or stalk to break the mounted grounds and spread the coffee grind into the basket is often coupled with a funnel. The funnel makes it possible to avoid getting out of the basket coffee by mixing with the toothpick. A funnel can be made by cutting the top of a plastic bottle or the bottom of a yoghurt pot at the right size. Below is a video to explain the process.

Find your WDT tool on Amazon
Find it on Aliexpress

Coffee distributors are accessories created specifically to evenly spread the grounds in the basket. They are generally sold between 15 $ and 60 $ but can reach extremes as well as tampers (for example, the luxurious O.C.D. brand sells its distributors at 180 $).

You have to buy a coffee distributor that matches the diameter of your portafilter. Nevertheless, it is a rare accessory for certain sizes. For example, there are a lot of 58mm distributors, but the 57mm is much harder to find (and expensive).

Find your coffee distributor on Amazon
Find it on Aliexpress

For La Pavoni machines, as I explained for the tamper, I recommend a diameter of 51.5 mm for the coffee distributor. This extra half millimeter prevents coffee from remaining on the edges of the basket. A distributor of such a diameter is rare, I acquired mine for 40 € at BPlus, a company that I had already presented during my test of the coffee grinder Apollo. If you want you an purchase a low expensive 51 mm coffee distributor here.

It’s easy to use a coffee distributor. There are blades under the dispenser which turning will spread the coffee well in the basket. It is necessary to adjust the height of the dispenser (by screwing or unscrewing it, the rim of the dispenser abuts on the portafilter) so as not to pack the coffee. After evenly distributing the coffee, it remains to pack it with your tamper.

My impressions about the usefulness and the interest of such a tool are very positive. The simplicity, the speed of execution and the regularity of the result justify in my opinion its acquisition. I recommend however to choose a heavy accessory (about 450 to 550 g).

By applying one or other of these tips, the water will cross evenly the cake of coffee which will optimize your extractions. 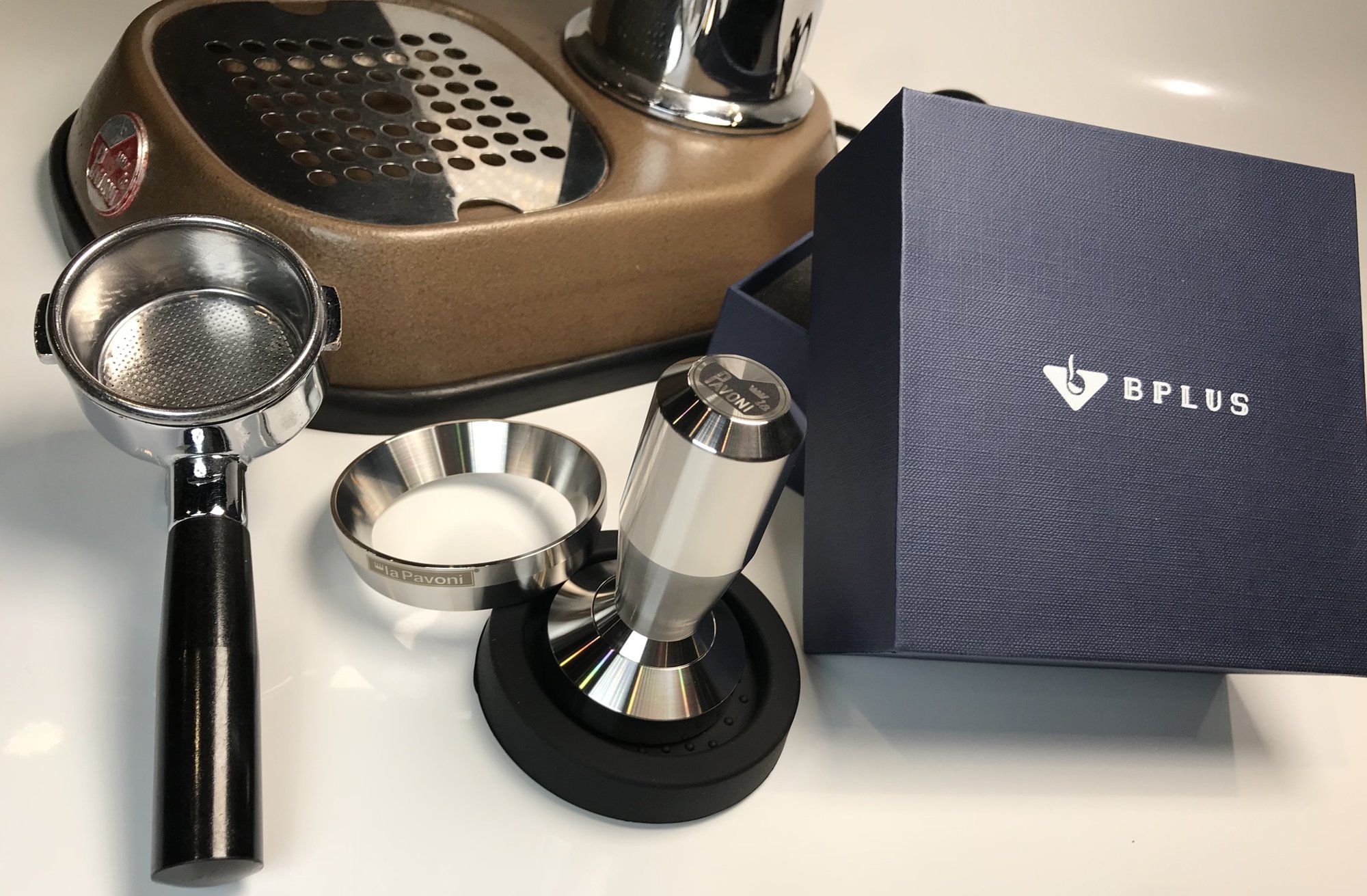 There are several filter diameters for espresso machines. The La Pavoni Europiccola coffee machine that I use has 51 mm diameter filters. Upon purchase, a plastic tamper is provided. As a result, the investment of a metal tamper becomes necessary. For this type of accessory there is a price range from 15 to  150 $.

END_OF_DOCUMENT_TOKEN_TO_BE_REPLACED
Category: Review
Privacy & Cookies: This site uses cookies. By continuing to use this website, you agree to their use.
To find out more, including how to control cookies, see here: Cookie Policy
Donate
If you wish, you can give me a Paypal donation of 1 or 2 $. This will make my site work by continuing to buy hosting / buying equipment that I will present to you. Thank you in advance for coming to read my article / for your donations.
Abonnez-vous à ce blog par e-mail.
Join 88 other subscribers
Join me on Discord

I created a Discord server with the aim of creating a small community around coffee. On this server we can chat by messages, free of charge and exchange around our passion. To join my Discord, click on the image or it's here : https://discord.gg/aGHtGMn
error: Content is protected !!
Loading Comments...